Our answer: a high performance five node CEPH cluster for less than 7.000€*

What you will learn

What you will not learn is how to setup CEPH, Proxmox, KVM, Linux, Networking and all other basics, described often enough somewhere else on the internet. Key technologies and methods we used are linked directly or referenced at the end of the document.

In Part 2 - Getting productive we will describe the steps from the test setup to production and the learnings we’ve made including our investment overview.
In Part 3 - Compute Power we will describe how to add proper computing power for under 5000 Euro to utiliize your CEPH cluster and do sexy stuff like mass live-migration of VM’s
In Part 4 - Taming the beast we show you how to run, monitor and troubleshoot your cluster

How it all began

FreshX is an agile software development company. Not to bring in too many buzzwords, we run a very streamlined software development lifecycle including version control, a CI and a CD. Furthermore we are hosting most of our customers IoT setups in our datacenter. Until last year we were running a typical co-hosted datacenter setup. A rack, a simple switch, a bunch of servers running Linux and KVM and a bit of Ansible config management on top. So far so good, it all worked fairly well, but migrating VM’s between servers was a pain for us and our customers. Furthermore everything was done in the good old command line style manually. Then we got - by chance - a generous offer of two 10GE switches and somehow, we got ants in the pants using them for more than just pushing packet around…

But let’s start with the old setup. What we had was a typically grown setup as shown in the following picture, with a simple redundant gigabit switch. 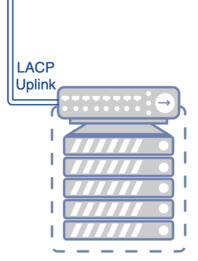 Each server was setup with CentOS 7 and we were running approx 40 KVM based virtual machines. Everything was setup redundant, the local storage, the power supplies, the power phases, as I learned in school ;-). We consumed around 380 Watt per phase with four 11th Generation Dell Servers (Intel E5xxx CPU’s), a simple TP-Link switch connected with LACP. Besides the hardware growing old our pain nailed down to the questions we discussed over and over again, how to:

To iSCSI or not to iSCSI

By the time we acquired those 10GE switches I was already fancying some old second hand Dell Equallogic iSCSI boxes which I was running in my old job back at university but despite the fact that I liked them a lot, I was hesitating due to

But what would we do then with our nice two 10GE switches? My fellow admin Florian and me had repeating, endless and sometimes exhausting discussions about our future setup running iSCSI, ZFS, NFS, clustered filesystems, hyperconverged all-in-one-unicorns and so on. And - we hardly had a clue about what is really possible in regards of performance over the wire (for IOPS and throughput). And since we are not the kind of company which quickly takes 20k and goes for a full blown testbed, we had to make up our mind already upfront.

By chance I ran over three super cheap bareboned Dell PowerEdge R520 servers (Generation 12, E5-24xx CPU’s) which I acquired and built up to become working boxes including 10GE Ethernet cards. We initially tested NIC’s from HP with NCP523 Chips (really low price cards) and Intel X520 NIC’s but we were not really satisfied with the handling, firmware updates and the support on current Linux systems and finally ended up with Dual-Port Mellanox Connect X Cards, (Connect-X and the Connect-X2 EN are the same, whereas the Connect-X3 EN has a newer chipset).

It was also clear for us to start with big 12Gb/s SAS HDD’s where we would choose HGST 10TB in the beginning, switching to Seagate later due to disk timeout’s in SAS 12Gb/s mode of the HGST.

After a last painful back-and-forth discussion, we chose to go for a CEPH based storage cluster based on the Proxmox Virtual Environment (PVE) and stick to what the basic system offers as standard and avoid manual CEPH tweaks under the hood. Our initial setup looked like this 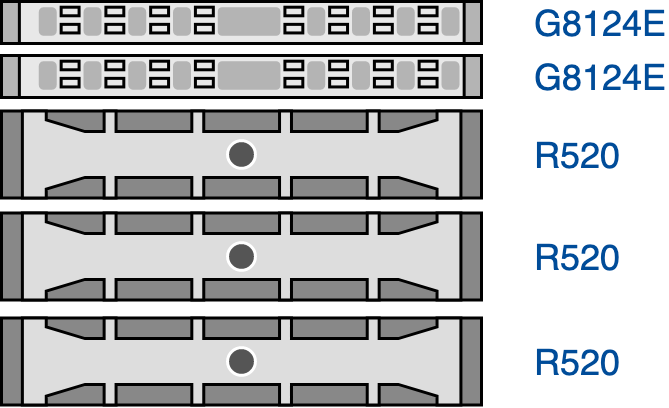 A note on the hardware

The Dell R520 seemed to us like a perfect platform, since it runs DDR3 memory on a fair price and the backplane allows for 12Gb/s SAS-3. The Dell R720 with LFF should do as well but avoid the 720SFF/720xd which looks nice and comes with a lot of HDD slots but has a SAS-Expander instead of a backplane to support the 14 drives which it can ship. This SAS-Expander will forcibly pull you down to SAS-2 running with 6Gb/s which is ok for the spinning disks but (spoiler alert) we would start to add SSD’s very soon.

Due to my old job im a heavy Dell disciple and we have no clue if other vendors (SuperMicro, HP or IBM) can be run with SAS-3 on their backplane.

If you have the money you could also go for 13th/14th generation servers (Dell R530/730 or R540/740). This gives you a guaranteed option for 12G SAS, vendor support, prepared systems for NVME’s, hence more free disk slots for storage and around 10% less power consumption. On the downside, CPU’s and DDR-4 memory are 2.5 times more expensive.

We chose the unsupported path since we trust the hardware platform and ultimatively will have one spare part of each critical component on stock. You will here need to find your right balance between invest and trust.

A note on network equipment

If you want proper stuff, you will pay but there are second hand options which are better than others. Our concern even today still is to have a replacement switch for the setup. If you go for options on the second hand-market, consider, that for some vendors (such as Blade/IBM or Dell) you most probably find firmware updates and public community support, whereas others such as Cisco or Juniper only provide this to valuable customers (say you have a valid supported contract, which is part of the business model). Check this upfront buying second-hand.

A note on the hyperconverged unicorn

Hyperconverged setups are the latest buzzwords from big vendors which shall allow you to mix storage boxes and compute boxes in one big clustered thing. While it sounds sexy in the beginning, look twice if someone wants to sell you the rose-smell pooping pink unicorn🦄or in short : Don’t!

In long : running a fully productive CEPH storage cluster will already be influenced by many factors such as

In case of problems (it’s not just a simple RAID controller to exchange) you will find yourself in a long process of searching and testing - we talk about this in Part 4. Don’t throw another hard to predict variable into the ring.

Back to the whiteboard

I have to say that I’m an easy going guy, sometimes too easy going, such as
Let’s quickly try this fix! Ooops … Or I realize, that we want/need to update this VM? Well if no one is looking, lets quickly do it. Florian is - praise the lord - my counterpart, working very detailed and exact and we learned over the last years to mix our qualities nicely together highly reducing the length of our chalk board discussions. My view after the the first testbed run was

Florian on the other hand was like : i will not run that setup in production, unless we meet certain basic criteria such as :

Well, we ended up with the following agreement, which is also our recommendation for a basic productive setup

After clearing this out, we prepared a plan on how to finance the endeavor and what we would need to start, which took us two month to get all the boxes equipped with 2 x 10TB HDD’s each, 10GE network + cabling and suiting SAS3 HBA Controllers.

Meanwhile we prepared our datacenter so that our existing infrastructure was moved to the 10GE network infrastructure and the servers have been connected with 802.3ad LACP bonds. Despite me plugging a network loop at our colocation💩(making me the most valuable employee in December), everything worked very well and solved already our network redundancy problem✅but also pushed up our average wattage to 500W (redundant 10GE networking does not come for free!)

Well. This is the end of Part 1. In Part 2 (From testbed to productive) we will go into more details such as

In Part 3 (Adding a four node compute cluster with 80 cores and 0.5TB RAM for less than 5000 Euro) we gonna add some beefy 3GHz compute nodes to our storage setup and migrate our old datacenter into the new setup